Whalers and missionaries followed and as European presence grew in the area, conflict inevitably ensued.Today, however, the area is a laid back and friendly haven for tourists and locals alike.

The Bay is home to many places of both Maori and Pakeha (European) historical importance with Russell (New Zealand’s first permanent European settlement), Okiato (New Zealand’s first capital) and Waitangi (scene of the signing of New Zealand’s most important legal document the Treaty of Waitangi) being among the three most significant. 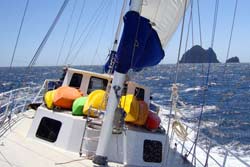